After losing in a playoff to make it out of the local qualifying for the 2018 US Open at Shinnecock, I’m stuck at my apartment watching everyone struggle, wondering how much I’d be struggling if I was there myself.

Besides on TV, the US Open website offers some other way to follow what players are doing. As shown here, they very generously give us information on everyone’s shots on different holes. We’re able to see where people hit the ball, on which shot, and what their resulting score was on the hole. For example, why in the world did Tony Finau, the currently second ranked longest hitter on tour, hit it short off the first tee, leave himself 230 yards to the hole where he makes bogey?

One of the cool things these images show is the groupings of all the shots on a hole, like the tee shots here. And when I see very specific and interactive data like we have here, I know it comes from somewhere that I’m able to see myself. So I figured I should grab that data and do some cluster analysis on different holes to see if there are certain spots that players like to hit it.

Here, I’ll go through the data we have, what the values and the numbers mean, and also the code I wrote to eat up the data and display the graphs. Once I have this part going, I’ll be able to perform further analysis to most things that come to mind.

First step was to search for where the data for the hole insights page was coming from. As always, open the dev tools, click on the network tab, and find what’s getting called with a pretty name.

The file itself is quite dense and has all the information, which is really cool! It has IDs for all the players, all the shots they have on the hole, which include the starting distance from the flag and the ending distance to the flag.

It looks like we have first name, player’s ID, whether or not they’re an amateur, last name, nationality, scoreboard name. The important part of this information is the ID, where we’ll be able to match players to shots.

Next, we’re given a few stats on the hole for the day:

END_OF_DOCUMENT_TOKEN_TO_BE_REPLACED

There was a comment on HN the other day about wondering about the average age of Nobel Prize winners. I did a quick search for lists of Nobel Prize winners, and the Nobel Prize org’s website actually has a page listing winners and their ages. The data’s tucked in the html file, but I figured with scraping and a little numerical work, I could do a little analysis easily.

The first thing I did was download that html file, and store it locally. Sure I’m scraping data from an html file, but there’s no reason for me to hit the server every time I’m testing / adjusting my script. It’s important to realize that even though I’m dealing with a web page, I don’t have to actually use the internet to do the analysis. Downloading the page simplifies things on my end by not having to use the requests library, and also saves a few server hits on the other end.

The other thing it allows me to do is modify the html and put an id on a div tag which helps me locate the data I want. After look through, the div that contained all the data about the winners and their ages didn’t have a class, id, or anything else identifiable. It was literally just a div tag, and when you’re trying to automate data collection from a DOM, classes and ids are key. But since I downloaded the page, I was able to put an id on the div I needed to grab, and didn’t have to deal around with maneuvering to it using parent tags.

The relevant info for each of the winners was structured pretty well within that div. In order to organize the information, I created a class for each of the prize winners, and input the data by looping through the html.

From here, we want to get an average and a visualization of the ages of the winners for each prize.

The code above print out a little csv table for each of the prize types, as well as creating a histogram and fitted distribution for each, as well as the ages for everyone, regardless of prize type.

Somewhat grainy images of the fits are below 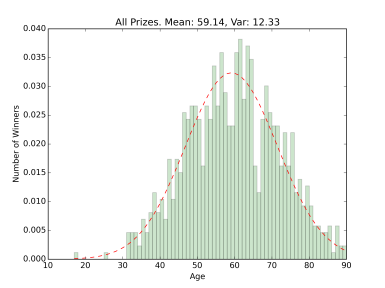 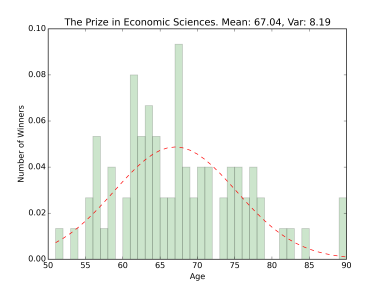 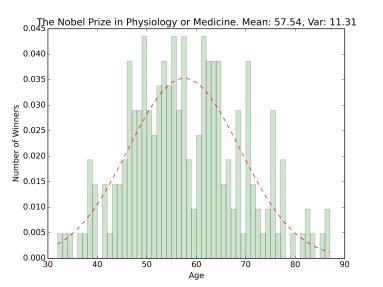 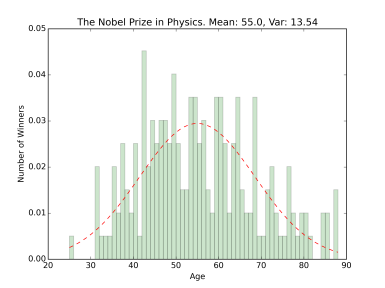 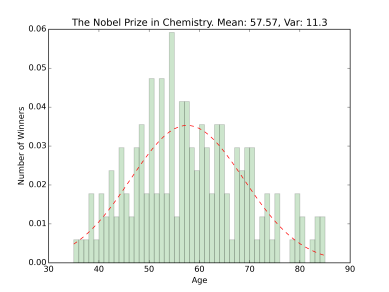 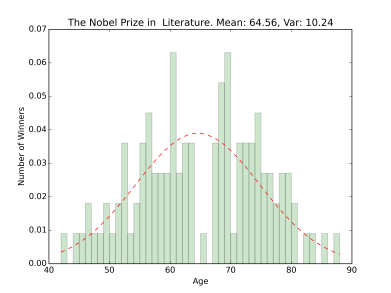 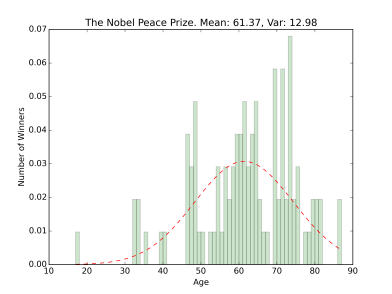 The overall age distribution is impressively normal. The couple outliers on the younger side are the 2014 Peace Prize winner Malala Yousafzai, and the 1915 Physics winner William Lawrence Bragg who won jointly with his father for work with X-Rays. Besides those winners, the rest seem pretty centered around the 60 year old mark.

There’s a funny dip in the graph for the prize on literature right around the mean. Only one winner with an age of 64-66. Funny because the mean for that award is about 65.

Youngest winners for each:

Oldest Winners for Each

Oldest winners seem to be around the same age, while the younger winners seem to differ by prize type. Kind of interesting, given that the prize for Economics wasn’t started by Nobel in 1895 like the others, but rather in 1969. (Check out the wikipedia entry here.) The fewer number of winners could explain the youngest winner outlier. Once the award has been around for longer, you’d expect someone younger than 51 to win. Using the distributions, we can actually guess the probability that someone younger than 51 will win: about 2.5%.

Another explanation that I’ve heard before is that sometimes prizes are won for contributions over time. They want to recognize a person for their contributions over their careers, but not necessarily their research in their winning year. That could easily push the average age up. Obviously the Nobel Foundation would refute that, but who knows.

NLP on the descriptions — Most of the winner’s have a little sentence below that talks about what they did to deserve the prize. Some processing on that text might be interesting, like seeing what the popular keywords are for example.

Deal with multiple people sharing the prize — The reason there are over 800 winners of the 6 prizes is because people share the prize. The links on the page go to a more full description of the prize winner(s). For shared prizes, I might want to take the average age for the winners and only use that. I could also do an analysis on how often the prize is shared as opposed to won outright. Maybe the percentage of shared awards have changed over time?

Check out the gist here. Requires that you download the html like and add the id to the tag like mentioned above. And also have the required libraries installed with pip.

Comments? Want further analysis? Want to yell at me for bad analysis? Let me know on twitter.